Review of UFOs activity and anomalies near the Sun - January 12, 2013.

Interesting shot. Photos of the plane on the chromosphere of the Sun obtained 12.01.2013 at 11:57 Moscow time in the hydrogen line H_alfa (6563 A) in Kanzelhoehe Solar Observatory (Austria) 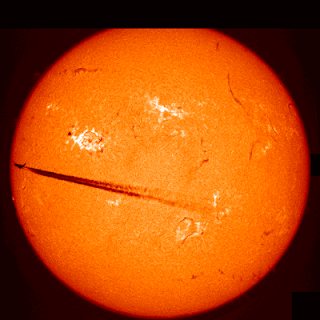 Photos of the plane on the chromosphere of the Sun obtained 12.01.2013 at 11:57 Moscow time in the hydrogen line H_alfa (6563 A) in Kanzelhoehe Solar Observatory (Austria) 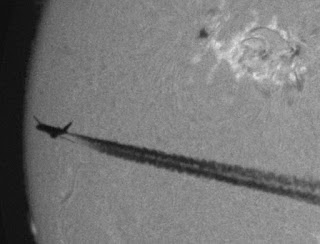 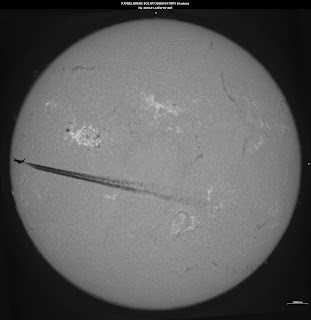 UFOs and anomalies in images of NASA satellites around the Sun - January 10, 2013

Many Giant UFOs Anomalies around the Sun - the official NASA pictures - January 9, 2013.

UFOs and Anomalies near the Sun, in the official NASA pictures - January 8, 2013.

Warning! Appeared under the name the user XfileComander who puts reviews UFO near the Sun is very low quality, these surveys are published before those reviews that I do. According to this, if you do not want to waste time on low-quality images UFO near the sun, wait for the reviews that I spread myself.
Examined satellite pictures SOHO STEREO Ahead + Behind (EUVI 195), LASCO C2, LASCO C3, SWAP 174.

Anomalies and UFOs near the Sun - Review of NASA satellite pictures for January 7, 2013.

Very clear images of three UFOs in images swap 174, as well as a giant UFO images SOHO STEREO Behind, and UFO formation in the form of the symbol "Ж" on the LASCO C3. Examined satellite pictures SOHO STEREO Ahead + Behind (EUVI 195), LASCO C2, LASCO C3. You can see the different types of unidentified objects. Objects have different shapes and sizes. UFOs are in different points in space near the Sun. These objects have a material structure. Attention skeptics, religious fanatics and those who believe the tales NASA! Objects shown in the video are the real origin!
This is not interference in the satellite, not broken pixels, not meteorites, not the solar particles and other qualifications that tries to convince NASA. Interference, broken pixels, meteorites, the charged particles can not have the correct complex geometries can not travel on different paths with the correct motion vector change! All objects - a UFO different forms and sizes!.These many UFO near our Sun are real unidentified objects. UFOs are of different sizes, different structures, different forms. Many UFOs are around some "energy" field. "UFOs are always near our sun. UFOs flying into the sun, and fly out of the sun. Many unidentified objects, fly up to the sun and to maneuver at high speeds. For all movement UFO can be seen in my previous file perennial surveys UFO near the Sun on this channel. In the early history of research, I was getting good quality images of the objects, but more than a year, NASA provides the public images of very poor quality. People questioned NASA. NASA responded that these UFOs - a speck of dust on the lens, these UFOs - broken pixels on the sensor lens, these UFOs - meteorites, etc. Excuses, NASA was vast. But now, NASA is silent. People should know the truth!

Disclosure of the truth in January 2013: At the bottom of the ocean, close to New Jersey, found underwater pyramids and "Washington Monument".

Besides the pyramids, Frank identified obelisk resembling the famous Washington Monument, but exceeds the size of religious buildings of the U.S. capital (height Washington Monument is 169 feet). The rounded shape and some details of the base indicate that the needle may be artificial.

"In the study of the oceans with GOOGLE EARTH6 I found the 640-foot obelisk in the form of a tower. It is located about 120 ml of the coast of New Jersey. Located on a very large plane, without a number of other structures within a mile, building higher than the Washington Monument , which has a height of 555.5 feet.

Photo: Obelisk on the seabed by FM Salichs

On the east side of the base can be seen clearly square regions with very long, straight lines and right angles, leaving from fundameta. The lower eastern part of the base has a large circular hole, it seems that it has been hollowed.

The tower has a cylindrical shape and is just as high mahogany, with a narrow peak. 10 km to the east of the obelisk is 3 pyramids and 14 km to the west near the continental shelf are dozens and dozens of pyramids.

They are highly visible and easy to identify satellite images GOOGLE EARTH6. I'm currently working on a large video and pictures of these places and soon present them for viewing. In the meantime, I want to acquaint you with the details of the obelisk. Watch the video.

Discovery of the truth in 2013: The telescope "Hubble" space city FOUND!


24 April 1990, the shuttle "Discovery" brought into orbit telescope "Hubble". The atmosphere of the planet does not have a negative effect on him, so the resolution of the "Hubble" in the 7 - 10 times more than that of the telescope in the same class on the ground. December 26, 1994 "Hubble" handed shots, which was captured floating in space city.
Sent Telescope images, which are clearly visible to the whole city, floating in the vast expanses of the universe, became available to the masses only because NASA representatives did not have time to disable free access to the web server telescope. Of course, they confiscated pictures. And sealed. But, after a delay of a few minutes. That was enough to downloaded from the server images shocked the world. The city once gave the name "Abode of God."
It all started with the fact that the University of Florida Professor Ken Wilson said in one of the frames of a small obscure spot. Considering the "spot" by hand magnifier, he found that it has a strange structure. And this can not be attributed to either the diffraction lens telescope or the possibility of interference in the transmission image. After some discussion, the researchers decided to focus the telescope lens multimeter on this area of the universe and to remove it with the maximum for the "Hubble" resolution. 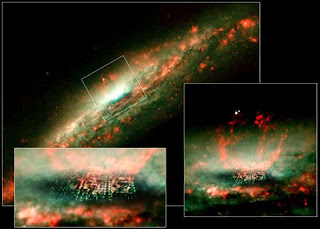 When the screen projection and shows the first image "spot", all present in the laboratory management "Hubble" frozen in mute amazement. In the photo was clearly visible structure, similar to a huge fantastic city. The giant structure, which span billions of miles, shone bright unearthly light.

Scientists decided to track their motion being detected object, and if moving, then what? For computer analysis of the series received the "Hubble" images it was found that the city's traffic coincides with the movement of neighboring galaxies. 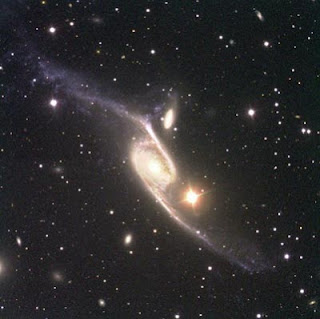 After the opening of the City immediately remembered published in Chicago in October 1955, in English, "The Urantia Book". It has a description of the center of the universe:

"... The Eternal Isle of Paradise is the eternal center of the universe of universes and the habitat of the Universal Father, the Eternal Son, the Infinite Spirit, and to coordinate and associated divine beings. This central Isle is the most gigantic organized body of cosmic reality in the universe. Paradise is a material sphere, as well as the spiritual abode. All reasonable creation of the Universal Father live in the mansions of material, therefore, and the absolute control center must be material, literal. Again, to repeat, that the spiritual substance and spiritual beings are real. "


Described in "The Urantia Book" center of the universe, is strikingly similar to the observed with the "Hubble" Celestial City. 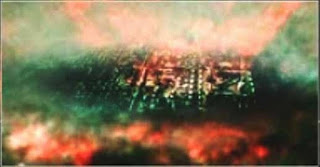 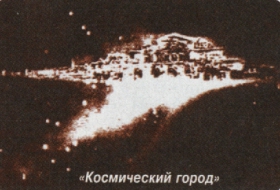 Usually religion easily be explained to what science can not explain. But in this case there was just the opposite - looking through a powerful telescope in the center of the universe, science has confirmed the basic postulate of religion, which is in the shining city on the sky may inhabit the Creator of all things.

Faced with a stunning opening of Sky City, the U.S. intelligence services immediately put on it marked "Top Secret" and hid all documents and photos in its archives. Why? Why is the grand opening of importance for all mankind, may know only a strictly limited number of people? Who gave the right to the heads of special services to hide this information? Why not protest against the highest representatives of the popular religions in the world? No answer ....
It would be naive to assume that after the opening of Sky City has not continued his study and research. Of course, continues. Only the world's population is unlikely to know the results of these studies. They are, as always, keep secret. And we will wait patiently for the powers that be deigned to open a steel safe and remove the most important information for mankind secrecy. Wait, when we deem worthy. 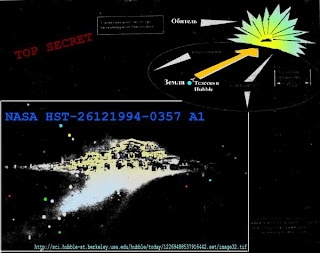 Anomalies and UFOs near the Sun - Review of NASA satellite pictures for January 6, 2013