This text was translated from Russian. I hope you will understand the meaning of what was said.
Scientists say that the activity of the sun at a low level? It's a lie!
2x2 = 4 is known to all, but that's only in the statements we are stuffed with mainstream science, it turns out quite differently. I will give comparative data of solar activity for 2007, 2008, 2009, 2010, 2011 and 2012 and the statements of the scientific community about the flares and solar activity during this period. 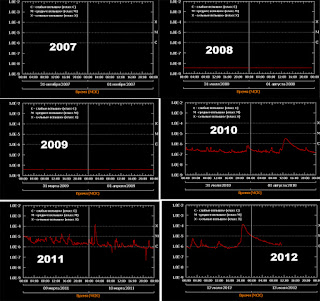 I have long noticed that in 2011 the level of activity (flare) of the Sun is the norm at the "C" and all statements by NASA and the rest is made ​​to account for this level of activity. But the truth is that not so long ago, in 2009, the outbreak of a class "C" considered a super-mega-powerful flares on the classification of the same NASA and others like them!

December 10, 2009. From the statement of the Laboratory of X-ray astronomy of the Sun, LPI, based their findings on the information received from NASA 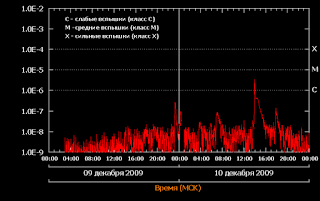 The largest outbreak occurred this year, December 10, 2009, in the northern hemisphere of the Sun. According to the X-ray monitor the flow of hard radiation of the sun began to grow rapidly at 10:50 universal time (13:50 GMT) and just seven minutes increased more than 300 times. At 13:57 Moscow on X-rays of the sun, measured in Earth orbit, peaked and reached 3400 nanowatts per square meter. According to the classification adopted in the world of GOES, this meant that the sun for 8 minutes before (the time it took for the light rays to overcome the 150 million kilometers from the Earth) there was the most powerful in this year's X-ray flash points "C" 3.4. Prior to that, the biggest event of the year was a flash level "C" 2.7, registered in the summer, July 5, 2009.
Observations of the Sun show that the largest outbreak of this year occurred in the northern zone of the solar activity, which is currently at a latitude of about 20 degrees parallel to the equator. It is in this zone, in recent months, all concentrated solar activity. In particular, it was here in late October, a real storm broke out when a week in the sun occurred just 11 outbreaks, all of them - in the same active region NOAA found in the catalog number 1029. That area, however, disappeared in early November, and then in November and the first days of December, the Sun has consistently appeared and destroyed 4 more active areas with numbers from 1030 to 1033. None of them, however, failed to make a mark in the history of solar activity - for the past 40 days they have not been any outbreaks, but in the last two weeks (from 24 November), with the sun and all disappeared all sunspot groups .
Against the background of this trend occurred last event admittedly quite unexpected. Outbreak occurred in the new active region 1034, which appeared on the Sun only 2 days ago and on the day there were only flashes three spots (it is believed that the area of ​​the more active, the more it spots and the more complex their mutual configuration). Given this, it is likely that the event will remain single, and a solar storm end of October, this time will not be repeated - in solar physics sometimes encountered a scenario where a potentially weak active region produces, however, quite a powerful event exclusively due to the that just gives all his energy into one blast. After that, these groups tend to break down quickly. However, not excluding other scenario.

In any case, at the present time, the region is on the eastern edge of the Sun, and will remain in the field of view of observers on Earth for at least 10 days. Around this time, she will need to get to the west end due to solar rotation. This means that all of its evolution, on what would be the scenario does not develop, pass before our eyes.

Unfortunately, the biggest outbreak of the year was the only one of the significant events of the year, missed the satellite Coronas-Photon. On December 1 spacecraft power system failed, resulting in installed on the scientific equipment was turned off. As of now reset to supply sufficient to enable space-based telescopes, as yet.

Do you understand? In 2009, a normal level of solar activity level was considered at the bottom of the graph at around 1.OE-9 at the time, in 2011-2012, was suddenly considered a normal level is below the "C" class or schedule 1.OE-6! 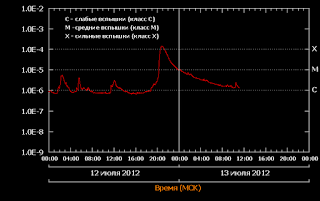 And compare the way described the power and force flash "C" 3.4 in 2009, and is described as a flash of "X" 1.4 in 2012:
Almost immediately after the outbreak began in the vicinity of the Earth's proton storm level of S1, which is the weakest of the five levels. Such storms occur about 50 times over the 11-year cycle of solar activity. Some of the "weather sensitive" people just react to them unwell.
Experts say that it is slightly more powerful than the flare of July 6, which has been classified as "X" 1.1. Previous outbreak occurred from the region AR1515. In general, experts say, the sun is gaining strength, and for the past six months recorded more outbreaks is X-class, which is the most powerful.
Overall, the researchers say that the majority of people will not feel any discomfort, but the weather-sensitive people may experience headaches, hypertension and cardiac arrhythmia. In addition, the probability of an interruption in the operation of the satellite navigation system.
LPI statement of September 4, 2012: Solar activity in August was the lowest in four months
Solar activity in the last five months is still at a record low for the last 300 years, the level of this phase of the solar cycle, the sun is likely to experience a major failure cycle, similar to that observed in the late 18th century, the Dalton minimum.
It is said Sergey Bogachev, Laboratory of X-ray astronomy of the Sun Lebedev Physical Institute (LPI).
"The maximum solar activity had to be in 2011, then scientists have assumed that the maximum shifted to 2012. But now the average monthly Wolf numbers (which are determined by the number of sunspots) is almost three times lower than the usual values ​​for the maximum," - said Bogachev.

He added that since the beginning of 2012, the index had never even got to 70, with the peak of the previous cycle, which came on in 2000, the Wolf numbers over 170 units. However, for example, in August, the number of Wolf fell to the lowest in four months and reached 63.1. The deepest "failure" of this year occurred in February, when Wolf number was only 32.9.

"Over the past five months have not seen any upward or downward trend, a feeling that the maximum is reached, we have reached a plateau. But this is a very low maximum, its value corresponds to the last major crash cycle - minimum of Dalton," - said the scientist.

Dalton minimum was observed from 1784 to 1810 years, during two 11-year cycles. During these periods, the value of the Wolf numbers did not exceed 62.3. Bogachev said that at least the Dalton minimum is the only documented as regular counting sunspots began only in 1750 at the Zurich Observatory.

Another minimum - Maunder minimum, observed in the years 1645-1715, reconstructed from proxy data. It coincided with the coldest phase of the so-called Little Ice Age.

Bogachev said that the extraordinary tranquility of the sun and other indicators show, in particular, the power of X-ray flares. If the previous cycle were observed flare of class "X" 20, in this cycle was the maximum power flashes "X" 6. 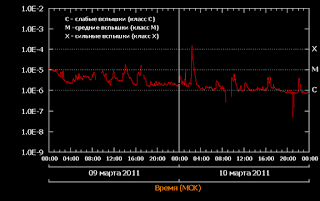 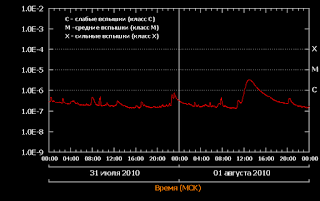 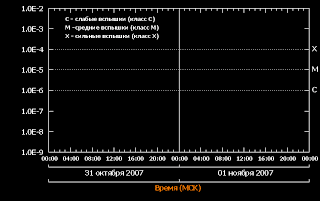 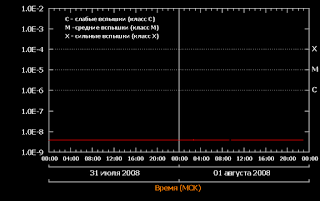 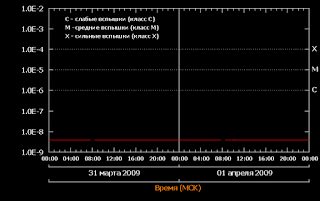 You see the difference between the lack of solar activity in 2007 at all, to an increase in activity to 1.OE8 in 2008, and a sharp burst of activity in 2009 and continued its growth in 2010 and 2011, so that by 2012 we led to believe that the activity level "M" and "C" class, and even the "X" - normal. With the outbreak of classes do not count as flash, and Class "M" also did not receive attention in publications of the same LPI or NASA.
Even the outbreak of class "A" entries frivolous and bearing only the northern lights and a small headache. And, you know what is all this done? Why in the last 2 years, people accustomed to the idea that flash "C" - a small thing, flashes "M" - nonsense that flashes "X" nothing more than light ignites the Northern Lights? 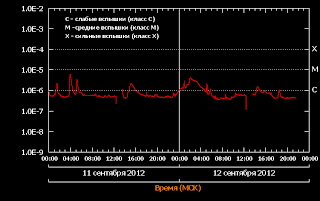 What would lull the public's interest in the activity of the sun, cutting off the possibility that a lot of people in different countries begin to ask uncomfortable questions. "All is well beautiful marquis" - the less you know - sleep tight people, and the powers that be at this time of rapidly building bunkers, store food, create seed banks in the permafrost and shall take all measures necessary to salvation - elect. 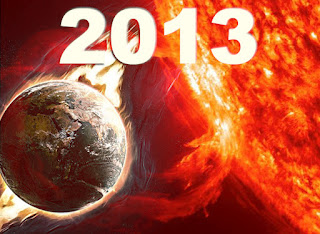 And they did it. Even this news: Government adviser calls to take action to "save the Earth" from solar storms that will shut off the U.S. power grid in 2013, ordinary citizens of Russia and foreign countries generally caused giggles and replies, "Do not be! Another nonsense, this is a fake! NASA says people the truth, this is for the fact that to scare people! "

You say - to scare people? Think, draw conclusions and say I did not warn you ...