May 1, 2015 - Friends, wrap your head with duct tape (to prevent it from exploding). It’s Down-the-Rabbit-Hole time!

That was day of the Challenger disaster, when the NASA Space Shuttle orbiter Challenger broke apart 73 seconds into its flight over the Atlantic Ocean, off the coast of Cape Canaveral, Florida at 11:38 EST. All seven crew members were killed, including five NASA astronauts and two payload specialists.

Millions of Americans (17% of the total population) watched the launch live on TV because of Payload Specialist Christa McAuliffe, the first teacher in space. Media coverage of the explosion was extensive: one study reported that 85% of Americans surveyed had heard the news within an hour of the accident. 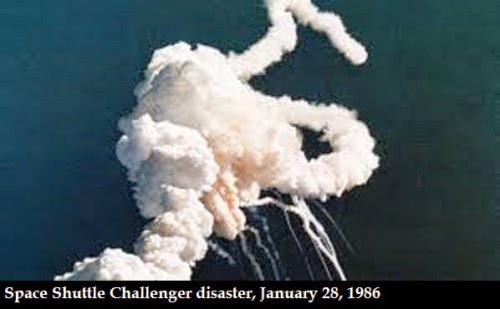 We were told that Challenger disintegrated because of a malfunctioning O-ring seal in its right solid rocket booster. The O-ring failure caused a breach in the SRB joint it sealed, allowing pressurized burning gas from within the solid rocket motor to reach the outside and impinge upon the adjacent SRB aft field joint attachment hardware and external fuel tank, leading to the structural failure of the external tank. Aerodynamic forces broke up the orbiter.The crew compartment and many other vehicle fragments were eventually recovered from the ocean floor after a lengthy search and recovery operation. The exact timing of the death of the crew is unknown; several crew members are known to have survived the initial breakup of the spacecraft. But the shuttle had no escape system, and the impact of the crew compartment with the ocean surface was too violent to be survivable.The disaster resulted in a 32-month hiatus in NASA’s shuttle program and the formation of the Rogers Commission, a special commission appointed by then President Ronald Reagan to investigate the accident. The commission found NASA’s organizational culture and decision-making processes had been key contributing factors to the accident.These are the names of Challenger’s 7 crew members:Francis Richard Scobee, CommanderMichael J. Smith, PilotRonald McNair, Mission SpecialistEllison Onizuka, Mission SpecialistJudith Resnik, Mission SpecialistGreg Jarvis, Payload SpecialistChrista McAuliffe, Payload SpecialistBut wait!
What if I were to tell you that most, if not all, of Challenger’s 7 crew members are still alive and thriving in their new professions, contrary to what we’ve been told?That is the contention of simonshack and other contributors on the chat forum, CluesForum.info. They claim 6 of the 7 Challenger crew members are still alive; some even kept their names. Here’s their evidence. 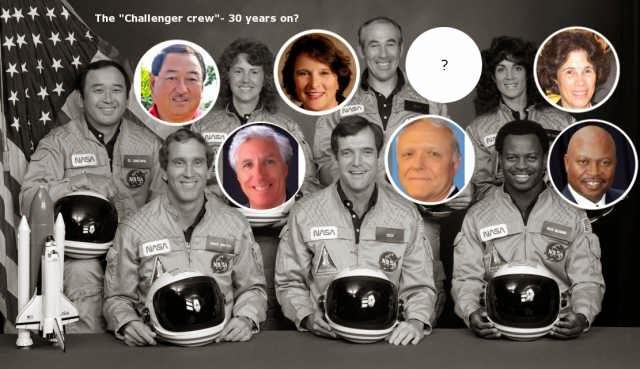 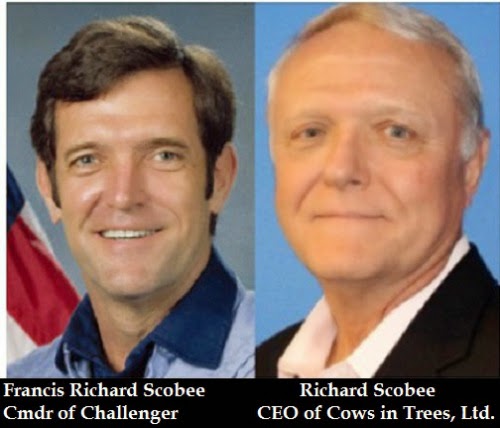 The source of the pic on the right of CEO Richard Scobee is his LinkedIn page.If you go on Cows in Trees’ website, you’ll see an animatioin of a rocket-powered cow in the sky with a swirling smoke-shaped 6, much like Space Shuttle Challenger as it was seen on TV exploding in mid-air. Wink, wink. That Commander/CEO Richard Scobee sure has a sense of humor! 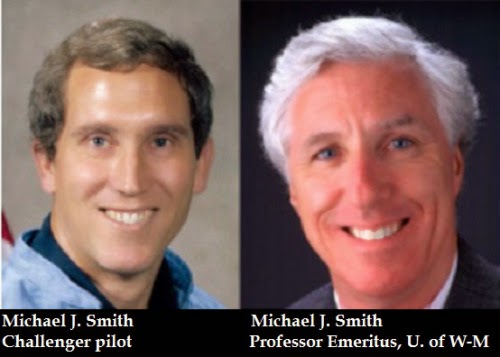 Pilot Michael J. Smith was 40 years old when he died in the Challenger explosion. If he were still alive, he would be 69 years old today. Well, hot diggidy damn, there just happens to be a 69-year-old Michael J. Smith whose addresses include Madison, Wisconsin! (He’s #74 on this LookUpAnyone list.)3. Ronald McNair, Challenger’s Mission SpecialistBorn on Oct. 21, 1950, Challenger’s mission specialist Ronald McNair, the second African-American astronaut, with a Ph.D. in physics, would be 64 years old if he had not perished in the space shuttle explosion. If Ronald (l) were still alive today, he would look just like this pic of his brother, Carl (r). 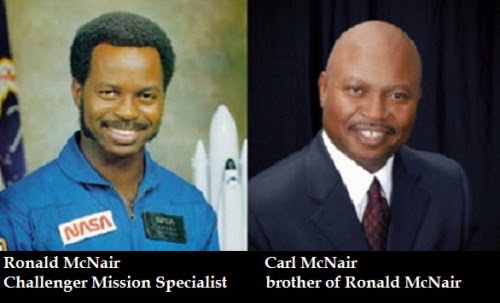 Carl McNair is an author, education consultant and inspirational speaker. He is the founder and president emeritus of the Ronald E. McNair Foundation in honor of his brother. Here’s Carl’s LinkedIn page.4. Ellison Onizuka, Challenger Mission SpecialistAnother Challenger mission specialist, Ellison Onizuka, the first Japanese-American astronaut, also has a lookalike brother named Claude. Born on June 24, 1946 in Hawaii, Ellison would be 68 years old today if he had not died in the Challenger explosion. If Ellison were still alive, he would look just like this pic of his younger brother Claude — same eyebrows, same eyes, same crow’s feet wrinkles, same nose, even the same hair-parting. 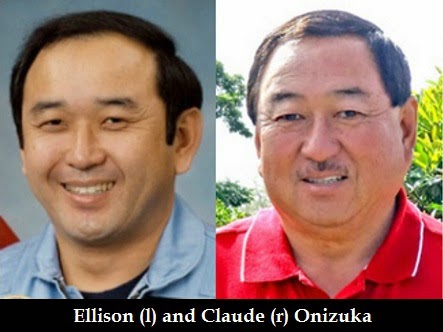 Claude Onizuka is a Liquor Adjudication Board Member of the Department of Liquor Control, County of Hawaii, Hilo, Hawaii.5. Judith Resnick, Challenger Mission SpecialistBorn on April 5, 1949, Challenger mission specialist Judith Arlene Resnick, with a Ph.D. in electrical engineering, was the first Jewish American astronaut to go into space and the second female American astronaut. She would be 66 years old today if she had not died in the explosion.If she were alive today, it is not difficult to imagine that after 29 years, astronaut Judith Resnick would look like Arthur Liman Professor of Law Judith Resnick at Yale Law School — same dark curly hair, same eyebrow shape, same dark eyes.

Simonshack draws our attention to how both Judith Resnicks’ upper lips form a slight peak (on their left) when they speak:

Simonshack also discovered that there is no Judith Resnick among all the Resnick last names on Social Security’s Death Index, which means as far as Social Security is concerned, no one named Judith Resnick had died.6. Sharon Christa McAuliffe, Challenger Payload SpecialistBorn on Sept. 2, 1948, Sharon Christa McAuliffe was a social studies teacher at Concord High School in New Hampshire when she was selected from more than 11,000 applicants to participate in the NASA Teacher in Space Project. If Challenger had not exploded, she would be the first teacher in space. If she had not died in the Challenger disaster, McAuliffe would be 66 years old today.Well, there’s a Sharon A. McAuliffe who’s an adjunct professor at Syracuse University College of Law, who looks very much like an older astronaut McAuliffe — same dark hair, same nose, same chin. 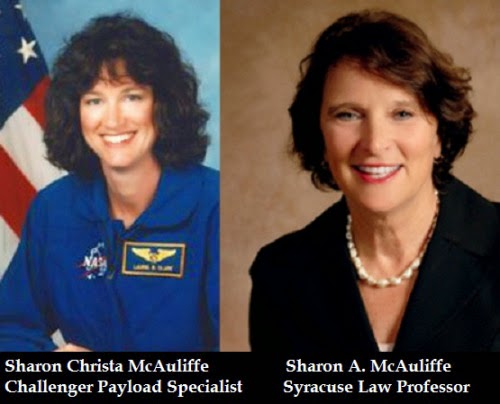 Alien Anomalies UFOs near the Sun in the survey for the April 30, 2015

Breaking news! The Illuminati! The plasma emission of the Sun in the form of The Eye of Providence - April 28, 2015

Breaking news! HOAX! NASA's lies about the live broadcast from the ISS - April 28, 2015

Pay attention to the image of the Earth, which emerges from the shadows. Watch carefully! NASA says it's a live broadcast! And now, look! There is a malfunction simulation program broadcast from the ISS and recording starts walking again, with the appearance of the shadow of the Earth. Oops! Thus, NASA keeps us for fools! The veracity of what is direct recording broadcast to the ISS, you can see in the upper right corner of the screen ..... NASA lying to us! You can see that the image is repeated again !? For what NASA is doing it?
Автор: myunhauzen74 на Tuesday, April 28, 2015