UFOs flew from the crater of the volcano Parinacota, the border of Chile and Bolivia! September 2, 2011

UFO in Earth orbit. Shooting with the ISS. September 3, 2011

As you can see, the object is moving away from Earth's orbit in the direction of space!
The object flies at a solar panel on the ISS and is lost from view.
This video shows the original shot + + ZOOM filters.

UFO near the ISS, while in the shadow of the Earth September 3, 2011

When zoom is clear how the object changes its structure!
Автор: myunhauzen74 на Saturday, September 03, 2011 0 коммент.

The full dimensions of this extraordinary "geometric force structure" now measures more than 300,000 miles along each edge -- more than 1.5 times the distance of Earth from the Moon!

NASA hiding something on the moon!

NASA is concerned that may be explored those areas of the Moon, where the allegations of NASA, the Apollo land on the moon sets, and those which allegedly ran and hopped on the lunar surface Neil Armstrong, leaving traces in the lunar dust. It is not hard to guess why NASA so worried about the concealment of such seemingly important lunar sites. Well, actually, because it would seem NASA should be pleased that finally something has been removed long-standing doubts "A were-the Americans on the moon?", But - no, NASA does as it should do in case if it is on the moon - was not.
NASA defends his property on the Moon
Based on materials from ScienceNOW
National Aeronautics and Space Administration (NASA) began to think about how to protect more than three decades of lunar sites are "a historic and scientific value."
On the Moon, as you know, are still traces of Neil Armstrong and Edwin "Buzz" Aldrin, Jr., as well as many other remnants of the "golden age" of American space exploration. Do officials feared that they trample the contestants established by Google and fund X Prize, in pursuit of the 30 millionth prize.
Toward the end of the month administration intends to issue "recommendations" for future spacecraft and astronauts who are going to encroach on the lunar property of the U.S. government. One version of the document, for example, asks you not to go down there, where to sit "Apollo" and where are the artifacts. In addition, the proposed no-fly creation of buffer zones and to exhaust gases and dust will not fall on the story.
Scientists and engineers at NASA were also a list of studies that could take private teams - from photography reflector laser ranging, established decades ago (the earth, astronomers still use them), to study food debris and other waste astronauts.
The recommendations NASA will have no binding force, because, according to the international space treaty in 1967, the lunar surface has no owner. At the same time, the Office believes that the private owners to sign the document if they are counting on cooperation with NASA, says science.compulenta.ru.
www

Johnson Space Center require large elaborate spacecraft to get them where they need to go.

"anyway my scope was not out of focus or "dewed" up do you understand it was in focus if you can say my scope was "dewed" up in the DAY when this object in space was captured look at the film in the day.http://www.youtube.com/watch?v=8gJPfRZlXkc do you call this film out of focus? and why would nasa and others tell me its the star wars project? Star wars project, which no doubt involves some of your objects. quote Professor of Experimental Astronomy ciao
Gerry, p.s you have to hunt for them .. Johnson Space Center require large elaborate spacecraft to get them where they need to go. IS THIS TRUE Johnson Space Center? OR IS THIS TRUE Star wars project, which no doubt involves some of your objects. They
don't talk about the military satellites,
of course, but there are many dicussions of earth surveillance, and
related issues. It is distributed only to academic organisations, so
you may need to get your local library to borrow it, but you
may be able to get this (for free) from
Subscription Coordinator
Room L-054
Lincoln Laboratory
MIT
244 Wood Street
Lexington
MA 0240-9185
USA

p.s if any person can film this object in the day in space i would love to see it like you jason macneaney on face book claims he can, if you can why would nasa tell me this space object is the star wars project with out any doubt ? and also nasa explain the other object are from military classified human spaceflight.
Johnson Space Center require large elaborate spacecraft to get them where they need to go."

Shot HAARP, UFOs or what is it? Shooting with the ISS September 1, 2011

According to the resource spaceweather.com, known by the false report about what constitutes a threat to Earth, the comet Elenina apparently fallen apart. Observationsamateur astronomer Michael Mattiatstso of Australian Kestlmayna show a markeddecrease in elongation and brightness of the comet over the past 10 days.


The behavior is similar to a comet Elenina comet LINEAR, which collapsed in 2000,approaching the Sun. Mattiatstso also watched the event. "Yes, I watched thedisintegration of the comet in July 2000," he recalls. "It was pretty exciting to watch asthe day the core expanded, taking the form of cigars. The apparent disintegration of the comet Elenina similar, though less visually spectacular. "

Comets are large objects, and are easily destroyed by the impact of solar heat. So the likely collapse of the comet Elenina although unexpected, however, should not come as a surprise.

UFO in Earth orbit. Shooting through a telescope, September 1, 2011

Attention! Earth's magnetic poles change with the speed of a giant!

GPS fixes change the Earth's poles
According to engineers from the GPS service over the last year "running" of the magnetic poles of our planet has increased. North moves to the south at an alarming rate of 8 meters per hour ... 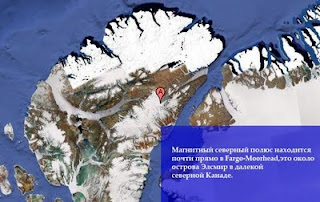 At this point in time, Earth's magnetic poles located near the Fargo-Moorhead, is nearEllesmere Island in northern Canada.
Eight meters per hour - 180 meters per day, is 65 km per year. The researchers assure us that they are now watching is the fastest in the history of the observed decrease in the magnetic field. What are the chances that in the near future we will also see the change ofthe magnetic poles to fully reverse polarity (ie the north magnetic pole is over the South Pole, and vice versa).
Modern GPS systems calculate a new magnetic North Pole. It is located almost directlynorth of Canada, near Ellesmere Island, which is quite far from the real North Pole.When measured in degrees - the deviation of about 15 degrees from true north. And while their speed only accelerated.
So what does this mean for us? In fact, while scientists argue about that in any way a unified theory. But they differ from the "horror stories" - like the fact that the Earth will stop and all life on it will die, until completely pofigistskih "nobody will notice anything."
So far we know only that the Earth's magnetic field periodically changes its polaritydoes. At the moment, the magnetic field lines are literally "run" from the South Pole to the North Pole, and the point in the southern hemisphere, crawling down into thenorthern hemisphere.
Earth "overstayed" pole shift
As scientists have determined that the planet has not just changed their poles? This information they found in the mountains and rocks - that the direction of the ambient magnetic field, how they form, has enabled researchers to reconstruct the history of thesereversals. According to geologists, the last time the field turned over about 780 thousand years ago (0.78 Ma), prior reversals took place in a very disjointed schedule: 0.99, 1.07, 1.19, 1.2, 1.77 and 1.95 million years ago.
According to this scale, the typical period between the "turn" in the past few million years,it is much less than the duration of 780 thousand years. Ie You can say that at this stage"revolution" was overdue.
Is this true? The symmetrical structure of the magnetic anomalies on either side of mid-ocean ridges give us a continuous record of magnetic reversals, numbering almost 200 million years. This shows that the time between reversals - is not constant and varies from a few hundred thousand years to millions of years. As it was, for example, in the Late Cretaceous period, then a reversal occurred, with an interval of about between 85 and 125 million years ago. Ie field retains the same polarity for 40 million years.
This view suggests that an attempt to predict the future at a geomagnetic "periodicity" of past reversals - a very risky venture, to say the least. Another thing is that the current weakening of the Bol factors indicate that the strength of Earth's magnetic field changes during a reversal, because the geodynamic theory suggests that the reversals are likely to occur when the fluctuations in the cosmic core convection weaken and destabilize the dipole. This prediction is particularly relevant in light of the fact that the strength of Earth's magnetic field has been steadily declining at a rate of about 5% in 100 years.And since we first started measuring it in the mid-19th century, we can say that over the past 200 years, it has weakened by more than 10%. Is this a harbinger of a reversal?
Scientists tell about it ... stones. They can store information about the ancient Earth's magnetic field intensity. Ie ancient rocks show how they were magnetized millions of years ago.


Soon the Earth will be a little "North" and "South"
So it rocks suggests that each "switching" of polarity occurs when the field is the weakest. And a little less extreme dips in the intensity of the field when they are associated with so-called "time shift" - a period when the change of magnetization showed that the magnetic poles are merely "wandering" is quite far from the geographic poles (just like now). Just geodynamic theory predicts that the weakening of the magnetic field seems to be associated with new processes within the Earth's core. It is interesting to note that the field in our period, was much stronger than the last time a "revolution." These data may explain why the polarity of the current interval is longer than the previous.
The other interesting thing - before the field were rather consistently at every turn. The level of field strength on each change of polarity of each other, over time, decreasing from right to left. In each case the reversal is preceded by at least 20 - 40 thousand years, rather a continuous decay of the field at about the same, very low, the value at a much faster recovery of the field after the transition. In this context, a couple of centuries, the field weakening - not so much.
So, history tells us one thing: turn not an instantaneous event, and our compasses will point to the north and south right tomorrow. Instead, the geomagnetic field will weaken, and the magnetic poles start to wander in the lower latitudes, and perhaps they will even more! Ie in different parts of the world's compass will point to a certain point of the axis of the pole. This process can take thousands of years.

Haarp, Hologram, Or Nature? This cloud is completely Bizzare!! Phenomenon? You Tell me! If you enjoyed this video please share it to help get this viral!! Check out my channel for my videos like this!!