UFOs in the orbit of the Sun - Review activity for February 9, 2012

Email ThisBlogThis!Share to TwitterShare to FacebookShare to Pinterest
Ссылки на это сообщение
Ярлыки: 2012, aliens, anomaly, conspiracy, CONTACT, disclosure, google, invasion, miracle, orb, plasma, Plasmoids, RODS, secret, spacecraft, ufo, ufo's, инопланетяне, нло, пришельцы
Planet Nibiru - Planet "X" is visible on the background of the moon! Google Sky! February 7, 2012! Now NASA will not hide the truth! The first observations in the infrared spectrum have been made when Nibiru flew past Mercury in August 2011.http://youtu.be/hLbhYtTps14 And now look what's going on February 7, 2012 near the moon! We now - we know the truth!

A strange object - a UFO near the Mercury 7 February 2012

Urgent! Attention! Russian scientists have penetrated into the lake of the VOSTOK (East)! February 6, 2012

After three decades of drilling, scientists from the Russian Antarctic Expedition have brought well up to Lake Vostok, hidden under the ice at a depth of nearly four miles.This lake is isolated from the atmosphere and the biosphere for hundreds of thousands of years, and therefore may have a unique ecosystem. The researchers suggest that there may be in the lake bacteria have adapted to living in absolute darkness, low temperatureand high pressure.Indirect signs of microbial extremophiles, scientists have found a few years ago, when the surface of the lake had to go over 100 meters. 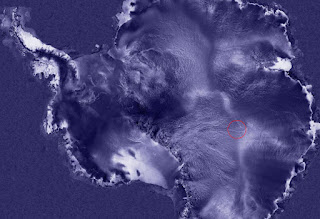 The need to maintain a hypothetical ecosystem intact, and sealed the lake - the scientists say a long time. Because of this problem drilling was interrupted in the past decade. It was necessary to establish technology penetration into the lake without polluting it from the outside.This method was invented in the Arctic and Antarctic Research Institute in 2000. In short it works like this: fill a growing hole pouring liquid - a mixture of kerosene and Freon, which isolates the lake from the outside world. The weight of the liquid column is not sufficient to compensate for the pressure in the lake. So at the moment of penetration of the drill into the water it begins to displace kerosene up the hole.This year, drilling was resumed on January 2. A February 5, according to "RIA Novosti", local experts have completed the drilling and reached the surface of the lake at a depth of 3768 meters.The last ten meters of the well is in fact water from the lake. At elevated to the depth of core was found a little bit of bacteria (2-3 cells per milliliter), but they may well be the result of surface contamination of the sample during transport or in the laboratory. Because talking about the habitability of the East or the sterility too early.Apart from biological research to study the lake and lodge it should promote the reconstruction of the ice climate of ancient Earth. AFP reports the words of press secretary Sergei AARI Lesenkova: "The bottom layer of ice was formed 400,000 ago, so the composition of gas bubbles in it can be judged on the composition of the atmosphere 400,000 years ago and the time elapsed since the formation of the lake."

UFOs in the orbit of the Sun - Review activity for February 5, 2012