Metamorphic UFO´s everywhere in Sävedalen May 4, 2012

Exclusive! Many UFO surrounded by ISS and stuck in Earth orbit - May 4, 2012

You will not see it in live ... This information is only displayed in the Mission Control Centre at the monitor ... Note the number of unidentified objects, UFOs and the location of the trajectory of the UFO. Obviously, these unidentified objects are not stars, not the satellites are not debris! The original video + ANALYSIS. You can clearly see that the objects appear and disappear suddenly! Video increasedthe speed by 4 times.

Giant SCOPE - UFO again fueled the solar plasma at the orbit of the sun! May 4, 2012

May 4, 2012 NASA's orbiting telescope, again, as on March 11, recorded near the solar surface, a strange object is dark in color, reminiscent of both a small planet and the spacecraft. An interesting feature of UFO recorded by NASA orbiting telescope, is a kind of thread, which is associated with the Sun.
Автор: myunhauzen74 на Saturday, May 05, 2012 0 коммент.

NASA scientists have confirmed that the planet Nibiru collide with the Earth in July 2012.

Nibiru Collision with Earth in 2012 was predicted long ago, but now astrophysicists, cosmologists and astronomers around the world have come to a consensus on the fact that the Earth is really faced with a planet that is now located near Pluto, writes about thisedition of Weekly World News.

Nibiru in the terminology of Babylonian astronomy means "planet of crossing", "meeting place" or "transition point", a concept originally meant crossing the river or the highest point of the ecliptic - the point of the summer solstice - and the associated constellation.Creating a Nibiru was first described in table 5 Enuma Elish. Its cuneiform symbol was a cross, or various versions of the winged disk. Sumerian civilization was located in the fertile lands between the Tigris and Euphrates rivers in the southern part of modern Iraq.
At the highest point of its trajectory was considered a place of Nibiru «summus deus» , the Sumerians believed that it is a shepherd who stars in front of her like asheep, and in Babylon, it was identified with the supreme god Marduk. According to research conducted by Alfred Jeremias, this interpretation of Marduk as ruler of the universe was characteristic of the earliest monotheistic tendencies in the Babylonianreligion.
Natural disasters are accelerated exponentially, and astronomers believe that they were caused by the fact that Nibiru is getting closer and closer to the Earth. 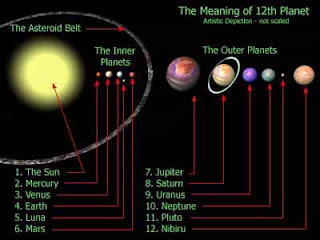 Creatures living on Nibiru are like people more than others to create reasonable in our Galaxy. Many experts believe extraterrestrial civilizations that "little green men" from Nibiru have visited the Earth and its DNA is combined with a human in order to create more advanced forms of life.
The original forecast of Nibiru collision with the Earth has an unexpected source. A woman named Nancy Lieder from Wisconsin (USA) said that the aliens who call themselves "Zeta," put her in the head a communication device and transmitted information about the impending disaster.
The first prediction predicted death in 2003, but after a detailed study was carried out parallel with the Sumerian and Mayan calendars. According to the interpretation of the researcher Zecharia Sitchin's Nibiru passes by Earth every 3,600 years, during which time the Anunnaki (the inhabitants of Nibiru) interact with people.NASA has publicly denied any information about the collision (even the very existence of Nibiru), but according to unofficial information from reliable sources, NASA confirmed that the expected date of the collision is July 21, 2012.There have been many similar statements about the end of the world, but many believe that a collision with Nibiru fits well with the Mayan prophecy about the apocalypse in 2012.Well, July is near ...

UFO´s, chemtrail planes and whatnot ? sighted during Skywatching session - May 3, 2012

In the skull of Napoléon Bonaparte, found a microchip!

This amazing discovery has made the French explorer Antoine Lefebvre - he found the skull of Napoleon Bonaparte a tiny metal plate with a diameter a little more than an inch, very similar to a piece of electronic machinery. It is this "spare part", says Lefevre, dramatically increased the intellectual capacity of the emperor.
Metallic object with sharp teeth was discovered by accident. Lefebvre was researching the exhumed skeleton of Napoleon, trying to establish the physiological reasons for the stunted (height of the emperor did not reach 160 cm). Researcher poluchip on work of the Government a special grant for 90 thousand dollars. 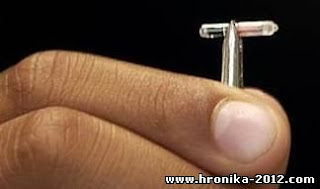 Drawing his hand across the inner surface of the skull, Lefebvre felt a slight bulge. Trying to better examine it, the scientist has taken a strong magnifying glass and saw a prolonged half-metallic bone is something ... It was like a microchip that is used in electronic devices.
A comprehensive study of a foreign object showed that it is nothing like a miniature transmitter of electric impulses to the brain and heart. For spacelike momenta, Lefebvre emphasizes, dramatically increase the brain's ability to solve complex intellectual problems.
A layer of bone tissue around the glands narosla which was quite noticeable. This means, according to scientists that the device is implanted, when Napoleon was young.
And realized it could have representatives of an alien civilization who landed on Earth and penetrated into the throes of revolution, France. "This was done to influence the development of mankind, - emphasizes Lefebvre. According to the calculations of the scientist, the stimulator was implanted future of intelligence a genius in July 1794. Napoleon disappeared while on a few days out of sight of all who knew him. Later, he claimed, I was arrested, spent those days in jail and released.
- But there is no documentary evidence of his arrest - emphasizes a scientist from the skull of Napoleon izvlekshy stimulant. - I believe he was abducted by aliens at the time, which made him a surgery to implant the device.
One indication of this operation is well-known habit of periodically Bonaparte put his hand to his heart, but no heart disease he was suffering, enjoying excellent health and excellent physical endurance. Irreducible, from time to time with the Emperor encountered a slight acceleration of heart rate by electrical signals sent to a stimulant.
Another, more obvious evidence should be considered as a sudden sharp increase in military capabilities Bonaparte rightly earned him the glory of a military genius. Prior to his disappearance, such abilities, Napoleon did not show. However, he successfully conducted a military operation to free the port in 1793, Tula, captured by the British, for which he was promoted to brigadier general. However, its implementation did not require any exceptional military talents.
But the fact that Napoleon was demonstrated on the battlefield after 1794, many of his contemporaries, and military experts say is almost a miracle. During the Italian campaign in the years 1796-1799, he commanded a small army of scantily clad and hungry soldiers, inferior to propivniku in numbers and artillery. This ragged army triumphed one brilliant victory after another. Crucial here was suddenly found the ability to calculate Napoleon all possible actions on the battlefield - and his opponent - about twenty moves ahead.
Since about 1810 military and strategic abilities have gradually weakened Napoleon; This is probably due to the fact that the chip in his skull gradually began to fail. It is also possible that the aliens were sent to this device or any electromagnetic pulses inyu decided that Bonaparte had accomplished its mission. Having lost their supernatural powers. Napoleon began to fail.
Antoine Lefebvre believes certain that aliens throughout the history of mankind had a number of ways to influence its development. Continue to do so today.
Автор: myunhauzen74 на Friday, May 04, 2012 2 коммент.

Analysis - a warning. The beginning of "doomsday"? Olympics in London 2012.

UFO AMAZING SHIP OVER POLAND IN INFRARED MAY 2012

UFO near the Sun - Review of the activity of unidentified objects for May 1, 2012

The 2012 Enigma by David Wilcock

Hidden Illuminati symbols in the movie! You did not notice!

Unidentified objects near the Sun April 30, 2012