Found The Big Sphere Suck The Flames of Our Sun Like Akhenaten With Aten, Egyptian Sun God

Four UFOs Arrive On The Aristarchus Crater of The Moon, Filmed By an Amateur Telescope - February 2021

The signal from Proxima Centauri was precisely aimed at the Parkеs Telescope.

This part of the transcript is devoted to proving that the signal from Proxima Centauri that came in April-May 2019 was targeted. This is evidenced by the discovered relationship between the constellation Centauri, where the signal came from, and the Australian Parks Observatory, which recorded the signal.

From the previous parts of the decoding, it is clear that the aliens transmit information through the combinatorics of letters in the earth words involved in the description of the transmission-reception of the signal.

In Australia, in the state of New South Wales, there are three astronomical objects: the ATCA Observatory, a separate MOPRA radio telescope, and the PARKES observatory. But only one of the three objects was selected, for a special reason.

This choice was made by the aliens in order to show the accuracy of the signal direction through an easily detectable connection between the" sender "– the constellation Centauri and the terrestrial" receiver " with the specific name PARKES.

PARKES (just a set of letters, the name of the signal receiver)

All three words are short, which makes it clear that they are all formed from the same set of letters. And the key word"recipient" PARKES through the letters RK, consists of two words-"sender" extraterrestrial message – SPEAR (копьё) and SPEAK (речь). (see Fig.)

From part 2 of the transcripts, it became known that at least the Message aliens with Proxima Centauri consists of a logout request for VOICE CONTACT.

Such bundles of 2-3 words, usually consisting of a small number of letters, for their quick finding, are "public keys", specially left (by the alien planets) on the surface of the encrypted message.

We (the authors) limit this part of the transcript devoted to the purposefulness of the signal from Proxima Centauri to showing the connection only of these English words: PARKES – SPEAR - SPEAK. We believe that their connection, through the presented reading algorithm, is extremely clear to English-speaking teams of astrophysicists, including the Australian team of the PARKES observatory, from which the only honest conclusion follows that the signal from Proxima Centauri is reasonable.

There are other proofs of the purposefulness of this signal.

Messages from alien planets are so arranged that each part of the transmitted information is duplicated by different variants.

But we, the authors, will move forward with separate short transcripts, so that they are extremely clear to all categories of readers, as well as the consequences - either pretending to misunderstand what we read, or deliberately ignoring logic and facts.

If we take into account that the word PARKES coincides with the two words SPEAR and SPEAK, then there are already 16 matches in the three parts of the decoding of the signal from Proxima Centauri.

The full transcript of the c signal from Proxima Centauri will be published at:

Were Hundreds Of UFO's Really Seen Leaving The Moon?

NASA WHAT THE HECK? Earth Sized UFOS Travel Through The Sun!? 2021

Out Of This WORLD Broad Day-Light UFOS: You GOTTA Watch This! 2021 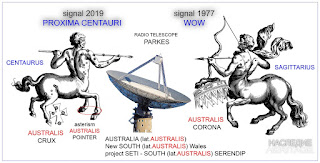 In April-May 2019, a team of astrophysicists from Australia, from the Parks Observatory, recorded a cosmic signal from the nearest star to the Solar System, Proxima Centauri. 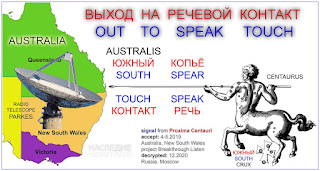